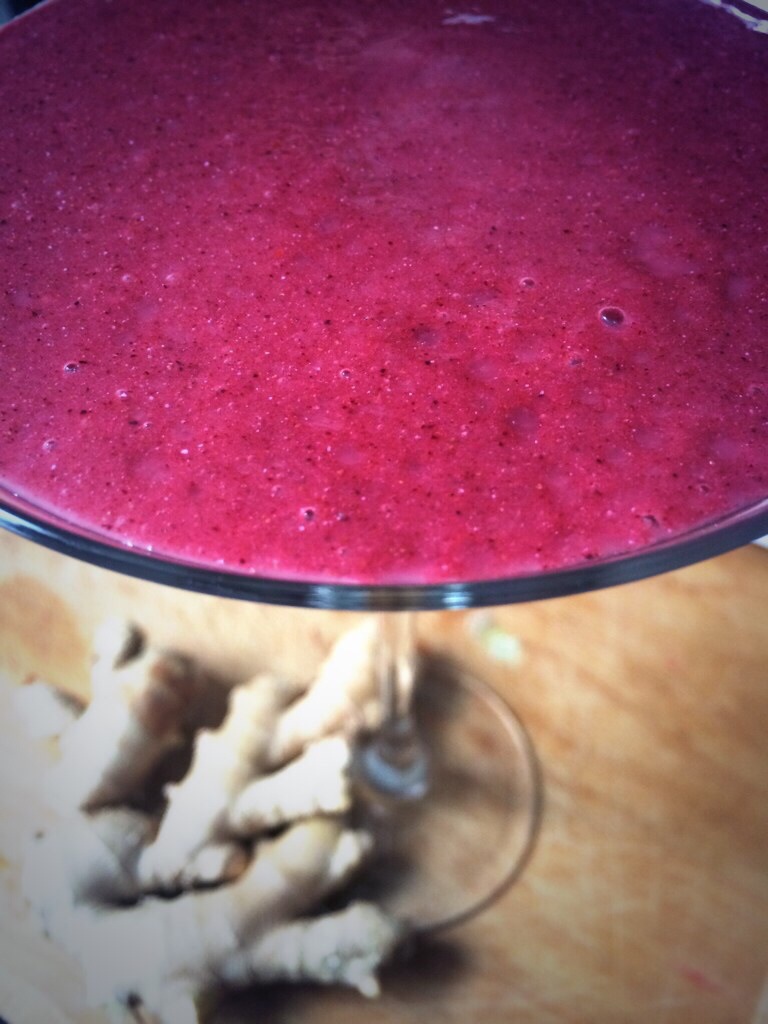 In the Vitamix this morning: a handful of frozen mango, 1/4 cup frozen blueberries, a bit of fresh ginger & some chia seeds. Amazing, decadent, delicious.

Got the idea of making a creamy, vegan chipotle dressing from a meal I had at the ridiculously amazing Cafe Blossom in Chelsea.  Everything on their menu is fantastic, but the “Crispy cake of yukon gold potato and black eyed peas, topped with chipotle aioli” almost made me lay right down on the floor in the fetal position and writhe with pleasure.  I asked my server how they made that amazing chipotle aioli — and the words “vegan mayo” danced from her lips to my ears.  It so happened that I had a jar at home that I had only used, very unimaginatively, on vegetarian burgers.  When I finally got down to business in the kitchen, I kicked the spicy factor up a notch with a few spoonfuls of horseradish.

For the dressing: combine vegan mayo, horseradish, apple cider vinegar, 1/2 of reconstituted, de-seeded chipotle pepper and freshly ground black pepper in a food processor.  For the croutons: toast 2 slices of gluten free bread in 2 tablespoons of EVOO with nutritional yeast, sea salt and thyme.  For the antipasti: go to the fucking grocery store. You think I marinated those olives myself? Ain’t nobody got time for that.

Kiss me now. Thank me later.

Yet another batch of my homemade raw chocolate. The potential variations are endless. This time I used coconut flakes and walnuts. My contribution to Easter dinner. 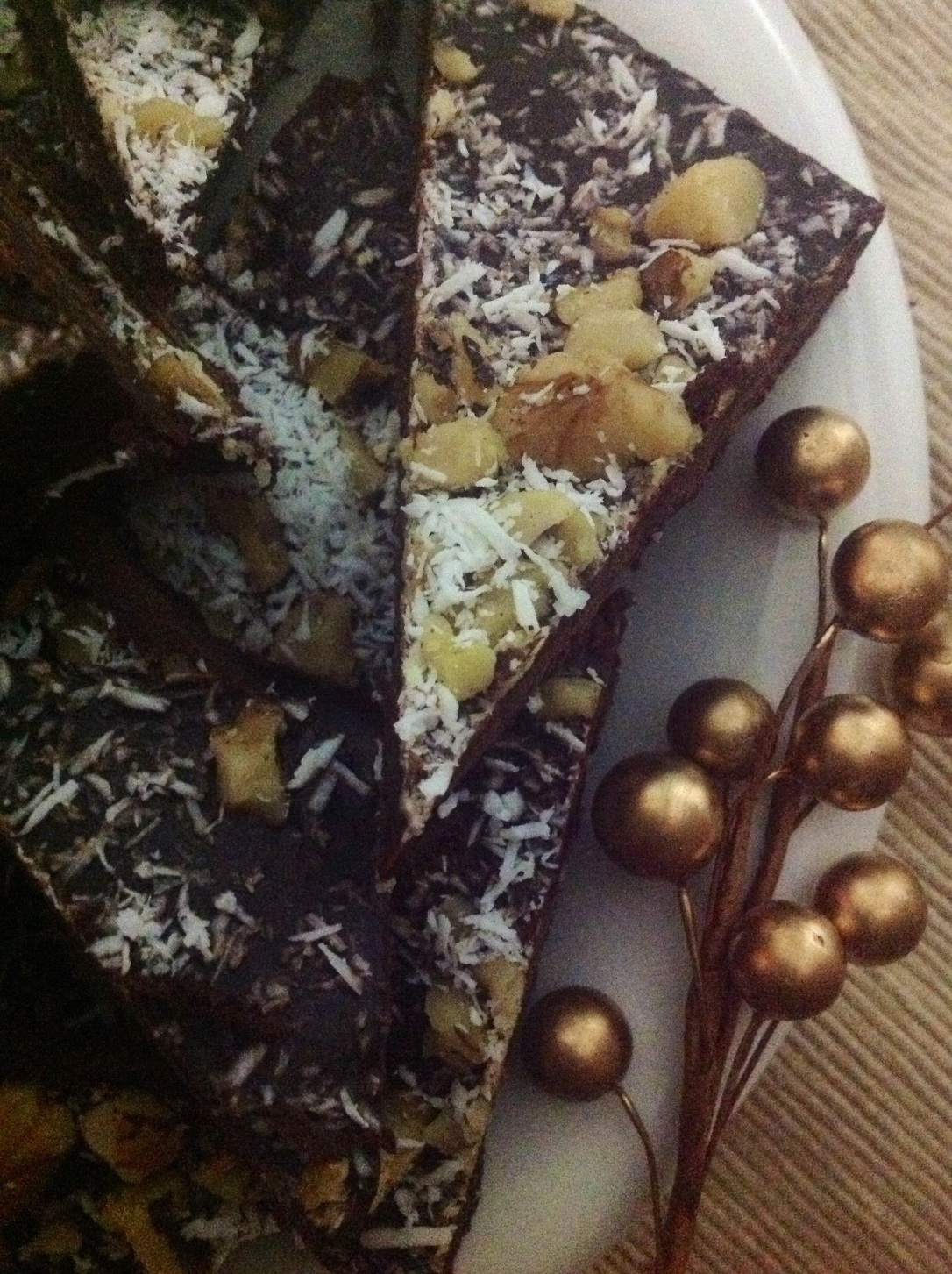 The first time I visited my town’s gluten free, mostly vegan bakery, I had no idea I was visiting a gluten free, mostly vegan bakery.  I just saw “baked goods” and wandered in, looking for something sweet and delectable. As I perused the menu peppered with “gluten free” this and “vegan” that, I was overcome with a mild sense of disgust. This was not a real bakery.  The healthier the food sounded, the less I wanted to eat it. I left without getting anything.

The second time I stopped by was with a friend. He had a hankering for something sweet, saw the bakery and asked if we could pick up something. I reluctantly agreed. When he realized how healthy everything was, he, too, turned up his nose. “I tried to tell you,” I said, shaking my head as we left.  Again, I left this bakery empty handed. We ended up going to a swanky bar for cheesecake instead.

The third time I visited the bakery was last week. Having settled quite comfortably into my relatively new veganish, gluten-freeish lifestyle, I was eager to actually taste their offerings.  I picked up an apple strudel muffin and a banana nut muffin. The former was divine, the latter was meh.

The fourth time I visited the bakery was yesterday. They had one of those apple muffins left. It was so good, I could have cried. It also realized that I would really shed hot, bitter tears if I had to pay 3-4 dollars every time I wanted a vegan, gluten free muffin. And so it was that I decided to try my hand at egg-less, milk-less, wheat-less baking.

I gave some thought to replicating the apple strudel muffin but that seemed too complicated.  So, instead, I decided to try out something I’ve successfully executed before: banana nut muffins.

For this adventure, I used a recipe from Namely Marley, a cool food blog.  I had to buy a few new staples to add to my growing vegan/gluten free pantry: vegan flour (I got white rice, though brown rice probably would have been a better choice) and egg-replacer, just in case – even though the recipe did not call for it.

I don’t really like following recipies, as you may have noticed, and I did not follow Marley’s very well.  Instead of using margarine, I used coconut oil. I must have mismeasured something, though, because the first batch came out looking rather homely.   They weren’t rising.  And they kind of had that “blah” taste than the bakery’s banana nut muffins had.  So, I added a tablespoon of “egg replacer” to the batter along with some ground cinnamon and ginger.  The second batch was *awesome*!  For these, I also added a topping, for which I used coconut and agave in addition to brown sugar.  My graduate students will be sampling these in our seminar tomorrow.

I finally decided that the first batch was *awesome* too, because it has less sugar/agave and will be my go-to healthier snack this week.   It also makes a pretty good delivery system for a dollop of almond butter.

Oh, and between you and me, my muffins turned out to be a lot better than the bakery’s.  A lot.  *dusts shoulders off* 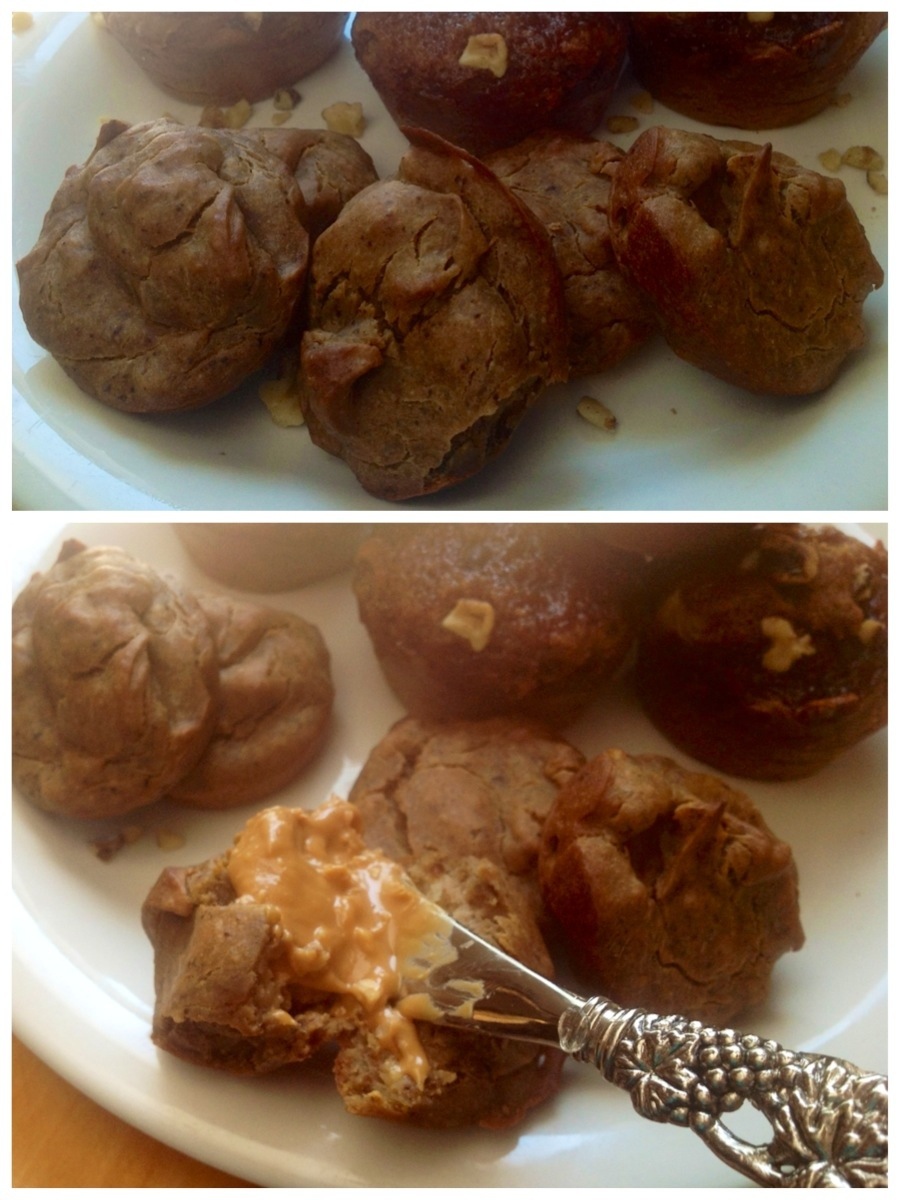 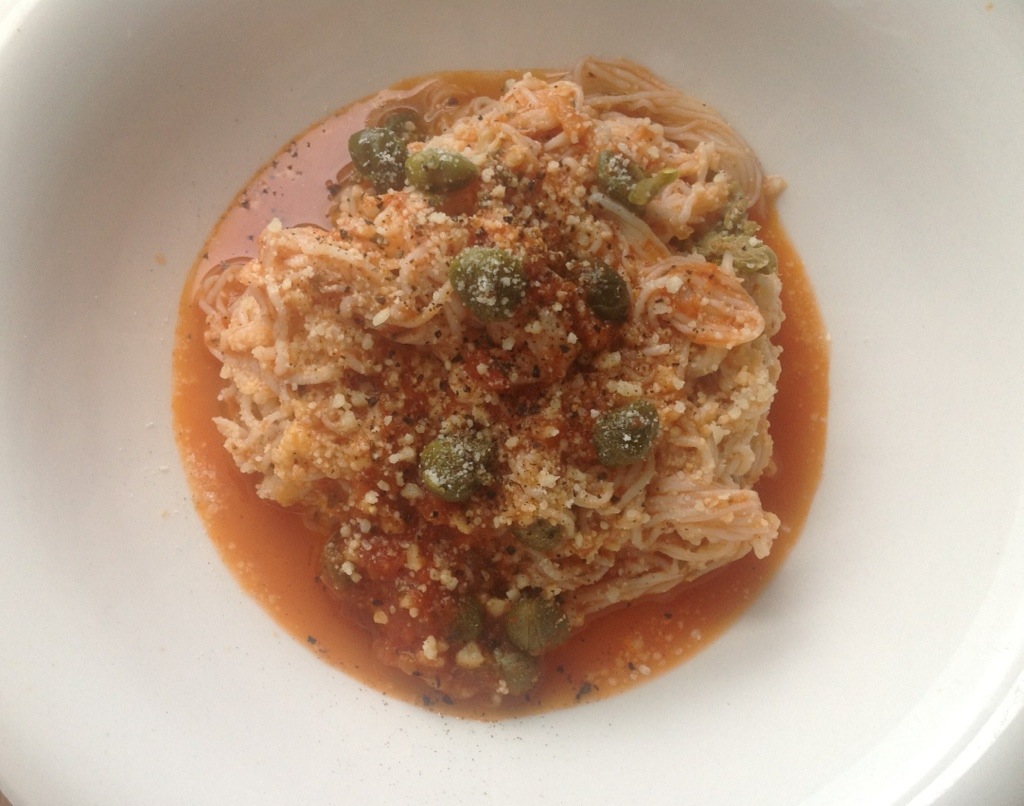 For this, I used half a package of House Foods shirataki angle hair tofu pasta. I’m not even a fan of tofu but these noodles are great! I used the other half of the package for miso soup. Be forewarned that it smells really bad right out of the package. This is typical for tofu noodles. But follow the directions for rinsing, draining and heating.. You’ll be just fine. The extra steps are worth it for this low carb, low cal, low fat, gluten free delight.