Over the past week, I’ve had the pleasure of getting to know Avi and Noah, the precocious, highly intelligent, charming, bilingual (soon tri-lingual) and generally adorable sons of my friend Miriam. I am so impressed with Miriam’s indefatigable, disciplined, joyous, organized, practical and upbeat approach to parenting. When I’m not in awe of the constant attention, care, thoughtfulness, wisdom, energy, playfulness and outpouring of love required to parent 5 year old twin boys, she almost makes me want to be a mother. Almost. (Though, “friend-of-other-people-with-kids” might work out just fine for me, too . . .)

Hanging out with Miriam and her sons was an unexpected addition to my New England roadtrip. I’d met her a few times over the years because of my friendship with her parents, but we had never had an in-depth conversation. This time, she happened to be at her parents’ home the day I arrived in Massachusetts, and for reasons unknown, we suddenly clicked. We found out that we both had been making music using Garageband and shared interests in foreign languages as well as some similar health challenges and strategies for healing. We stayed up into the wee hours of the morning discussing all manner of minutiae. We took a long walk on a nature trail where she pointed out the various plants and flowers that were edible. I found myself eating clovers (and loving it) and nibbling on tiny pink raspberries like a bird. I’d never done anything quite like this before, but thoroughly enjoyed every minute.

Miriam’s kids are pretty incredible. They flow effortlessly in and out of Spanish and English and have such alert minds that they also attentively watch movies in other languages that they don’t understand. For years, when I would see them in passing, I never heard Avi and Noah speak English (their mother and their grandparents address them almost exclusively in Spanish). Their mastery of Spanish is all the more impressive given that they have no Hispanic ethnic background in their family. It’s also really lovely that they can speak Spanish because they live in an extremely diverse neighborhood where over 50% of the children are Hispanic.

Noah and Avi were shy when I showed up in their grandparents’ kitchen a few days ago. I’m sure they noticed that I didn’t respond to whatever they were saying in Spanish and wondered what was wrong with me. When their mother explained that I speak English, they instantly “got it” even if they remained a bit suspicious of me. They would continue their on-going Spanish conversations with each other and their family, but they would generously slip into English when they wanted to tell me something. Their mother, who speaks at least four languages, would also sweetly translate bits of Spanish into French for me.

After the boys established that I was a nice person and cool enough to be included in their 5 year old inner circle, they started to really show off their various skills, inventive ideas, pranks and funny observations. I noticed some slight differences in personality between the two. They are both full of energy, playful, bright, creative and full of love. Noah seems a bit more pensive and analytical. He likes to build things (this morning he showed me a device he made to hunt for dinosaurs) and he often begins his English sentences with “Well, *actually* . . .” Noah is also very good at teaching things yet also humble about what he does not know (something all of us in academia should learn from). When I asked him to teach me something in Hebrew, he showed me how to write his name. Yet when I asked if he could read from the Hebrew dinosaur book he brought me, he immediately said “I don’t know how”, matter of factly, without an ounce of self consciousness. I loved it.

Avi seems to be more active, perhaps a bit more emotional and demanding than Noah. Avi knows what he wants and asks for it. He is very attentive and let’s nothing get past him. When I pointed to a picture and said the word for “truck” in Spanish, he shook his head and said – in English – with thinly veiled pity, “No, that’s a car.” Avi also very clearly loves me, which is remarkable given that he attacked my leg viciously with a fly swatter when we first met. I kind of knew there must be some affection underneath his playful predator-mode (a kind of behavior I instantly recognized from the crazy, yet well-meaning “attacks” my cat Zora sometimes directs my way). After I picked him up, turned him upside down and spun him around a few times, his little heart melted and he decided to be my friend.

Hanging out with kids is very novel for me. I was surprised at how much I enjoyed their company during this trip. We went swimming at sunset at a gorgeous lake and ruthlessly disturbed a family of ducks. I became a human launching pad for the boys, throwing them several feet into the air and catching them in the water. I taught them a few words in French. We made art on my iPad. (When Noah first touched the purple oil drawing tool on the screen, he checked his finger to see if the paint had gotten on it.) Avi bit my leg, then hugged it like a tree trunk and counted my toes. Noah showed me their “secret hiding place” next to the television (some kind of structure made of chair, a basket and a yoga ball). I watched with interest and mild concern as Noah vigorously attacked his brother with a fly swatter (apparently with Avi’s consent). At one point, Avi asked his brother “Can I do it now?! Can I do it now!?” – meaning “Will you please grant me permission to beat you down?” Noah agreed, which led to Avi hitting him twice as hard as Noah hit him. Before I could intervene, Noah ran off to his mother, crying. I’m sure he was a bit hurt but he was also embarrassed.

I went over to Noah and picked him up, which only made him cry harder. “No!” he whimpered, pitifully. I panicked for a moment, then I squinched his face (yes I know squinched is not a word, but somehow it naturally emerges from interacting with a child) and said “Hey! Wanna see something?” He got quiet for a moment, tears still streaming down his face. Somehow, I accessed a long dormant memory of a game my mom would play with me. Magically, my hand transformed into a creepy crawly creature which makes funny noises and tries to pinch your nose. Noah loved it, burst into laughter and smiled brighter than the sun. Then Avi came running, begging me to pinch his nose with the hand monster.

I am an only child and grew up far away from my cousins, so babysitting was something I did quite rarely. It has only been in the last year or so that I noticed myself appreciating children. Last Christmas, I spent the day volunteering at a soup kitchen run by my friend Betty. One of the homeless women brought her newborn son – an extraordinarily beautiful lump of golden perfection whose singular presence filled me with love. As I’ve gone back to the soup kitchen almost every month since December, I’ve seen this little lump get bigger and even more beautiful. Last month, my soup kitchen duties included holding him so his mother could eat and enjoy her meal. I noticed, with pleasure, how natural and lovely it was to cradle him on my shoulder. In the past, holding babies was always so awkward for me. But, for whatever reasons, something clicked this time and I knew what to do without anyone telling me. The Golden One was also obviously very comfortable – no crying or complaining as he gazed lovingly into my eyes. I was so enchanted that I didn’t even care when he threw up all over me. Three times.

Holding this little person, I wanted very much to communicate a few things to him and I somehow had the conviction that he could understand. So, I told the Golden One that he was a manifestation of God, that he was really smart and beautiful and that all good things were possible. He just started at me, blinking and smiling, which I took as 100% confirmation that he “got it”.

I do not know if a “mothering instinct” is presenting itself, but the idea of reproducing is becoming slightly more attractive. In the past, I thought of having children as something I might do one day after finishing graduate school and probably after getting tenure. I had fantasized about motherhood – especially when I was in love – but could not, for various reasons, seriously imagine myself having kids with any of my ex partners. For a while, I thought of reproduction as something people do for egoic reasons (i.e. “I want a little version of myself” or “I want to make a little person with this individual I love because my ego feels the need to extend itself and its attachments”). In this jaded, naive state of mind, I found myself mocking parenthood.

As I began to move beyond my attachment to not wanting attachments, I opened up to the miracle of Life as it emerges in the present moment. I saw that feelings (i.e. wanting or not wanting kids) can and often do change. I also saw very clearly that I, personally, could want to have children with the right man. I began to get a better idea of the kind of character, wisdom, personality, thoughtfulness, capacity for love and emotional maturity that would make a man an attractive partner and father in my eyes.

I still feel that parenting is something that I can take or leave — it is not Something I Must Do to Make My Life Complete. If I don’t have kids, at least I can delight in the presence of Other People’s Kids (and then go home to the freedom of my childless life). But as time goes by, I’m beginning to feel that children are probably in my future. Let us hope that an excellent partner, nanny, proximate grandparents willing to babysit, a child-friendly lifestyle and bottomless wells of patience are all in my future, too. 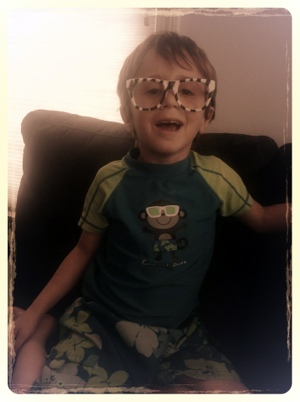