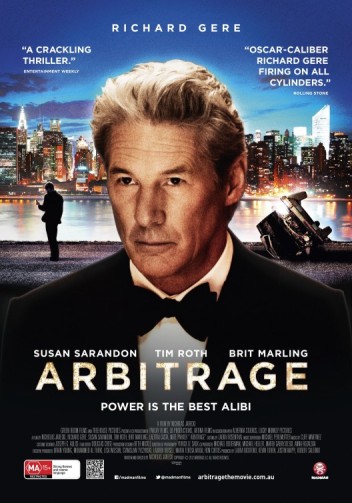 Richard Gere Could Get It.

This was the first thought that popped into my mind the second Richard Gere appeared on screen in the new, fantastic film “Arbitrage”.  Yes, 63 year old, salt and pepper, timelessly elegant, sexy,  $5,000-suit-wearing, charismatic, Buddhist Richard Gere could get it.  In a heart beat.  Several times a day.  But, I digress.

Arbitrage, the debut film of 25-year old writer and director Nicholas Jarecki, is one of the best films I’ve seen this year and one of the most compelling dramatic explorations of the moral underbelly of Wall Street I’ve ever seen.  In fact, it was so good that I plan to see it again.  The writing is brilliant, the acting  masterful.   Everyone is saying it: Gere hasn’t been this good in . . . ever?

The film has so many things in its favor: an excellent cast, gorgeous shots of New York, what appears to be very good sex, a hell of a lot of money and a story that effortlessly weaves itself between contrasting worlds — from the  Upper East Side to the contemporary arts scene to the streets of Harlem.  Gere is fantastic, but Tim Roth and Nate Parker also deliver very strong performances.  I won’t say much more, except that, being both Francophone and Francophile, I was particularly delighted with the way French makes its appearance in the film . . . and the surprising racial subplot that comes to play a central role in the narrative was intruiging and well executed.  I did not expect to hear the word “Nigga” in this movie, let alone four times, but its use was perfectly timed, incredibly honest and made many of us in the normally reserved audience of the indie theater where we viewed it hoot and hollar.  The tension and the suspense were so thoughtfully managed throughout the movie that I was literally on the edge of my seat.

When my friend asked me to see the film, I had never heard of it.  And I think that’s why I enjoyed it so much.  The trailer gives away too much of the plot, so look at your own risk.  The element of surprise makes the arc of the story that much more fulfilling.

And yes, Lord, let the record reflect, with no ambiguity, that Richard Gere could get it.